New FikusSt 20: The CAD/CAM developed for your shop floor, designed for you

Metalcam launches the new version of FikusSt, the CAD/CAM software specially developed for the workshop, which offers industry all the functionalities, speed and agility to access new business possibilities and reach new levels of productivity.

FikusSt 20, is a step forward in productivity compared to the previous version, with significant improvements in calculation algorithms, workflow organization, automation or rationalization of the steps necessary to execute design and manufacturing tasks. Fikus now takes 10% less time to open files.

It is now possible to insert several files into any Fikus function, simply by dragging and dropping them with the "shift" button, so it is possible to work with several geometries simultaneously. The way to exit functions has also been improved; in addition to the cancel button, there are now buttons on the bottom or top bar, especially useful with touch screens.

Another aspect that has been improved is the capability of customisation to easily adapt it to users' preferences, with a more efficient system for managing colour combination preferences or the inclusion of the dark-mode option.

FikusSt 20, developed for the shop floor 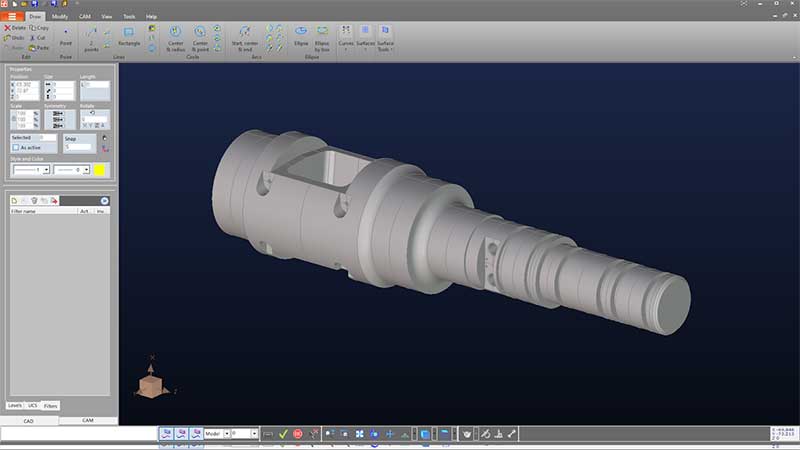 Tools that speed up the CAD process

Key shortcut commands for quick creation of basic surfaces have been enabled, as well as default values, which speed up the creation of the most common surfaces. An "exit" button has also been added to all CAD functions that do not involve a dialogue box or a new way of selecting geometries to copy, move or rotate.

Another important new feature is the new option to facilitate the creation of slides or extractors by applying a tilt angle to the cylinders defined for ejectors in the Y and Z axis, or the function that allows the center of a closed geometry to be displayed, which helps to reduce the time required for CAD processes.

Another notable improvement is the Cutting Plane option, which allows the creation of a new Layer/Level according to the position of the Cutting Plane and the possibility of creating a new automatic layer with Z level.

The improvements introduced in the CAM section are aimed at a more agile and faster workflow, for which the parameter and path forms have been reorganized, with a new distribution of elements and buttons and the inclusion of confirmation and cancellation buttons.

In wire EDM technology, improvements have been introduced in important elements, such as the inclusion of EDM processes in rotary axes, improvements in the detection and programming of geometries with inclined starting point, filters by diameter and the possibility of grouping holes, both by diameter and height in the Automatic Element Recognition. Process control options and new help files have also been improved.

In the Automatic Feature Recognition, inclined threaded holes, filters by diameter and the possibility of grouping holes by both diameter and height have been included.

In this version all options to be applied in the Corner parameters for Bisector corners have been implemented. It is also available the control of the default position of the upper and lower nozzles of the geometry from the preferences settings.

With the new version, FikusSt has introduced multiple enhancements to the wizards to improve their functionalities and productivity, such as the new functionality to enable and disable cuts in the cutting sequence within the wizard.

Tools that speed up the CAD process 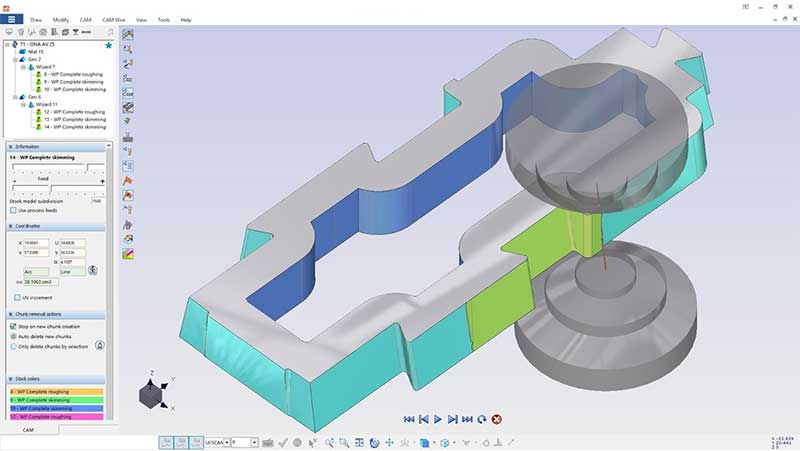 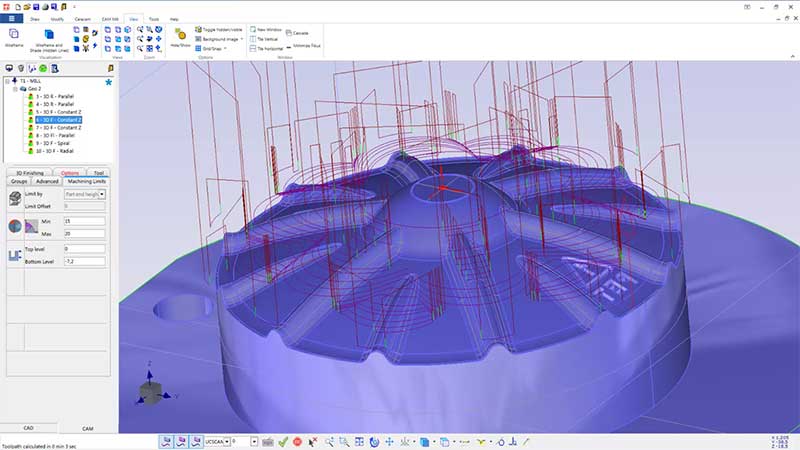 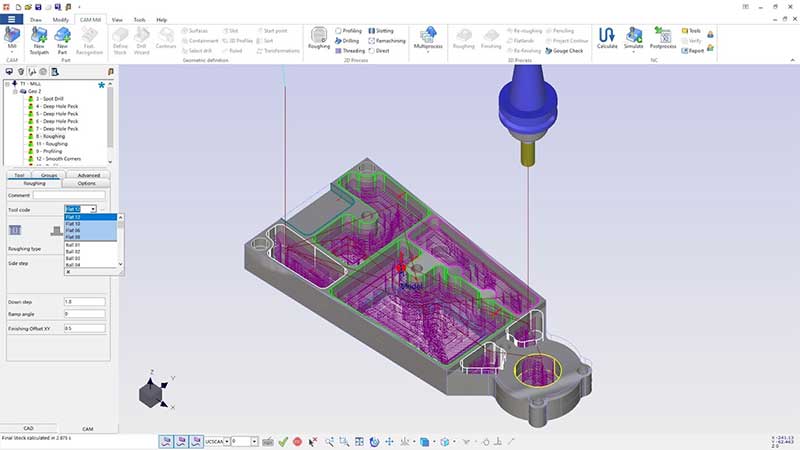 In the FikusSt CAM for milling, the toolpath calculation has been improved to offer more efficient toolpaths with fewer jumps and new options in Adaptive Roughing have been enabled to help increase speed and productivity. A display list of the last four tools used has also been implemented in the Tool Codes drop-down list by process type.

In 2D milling, the UCS option in Feature Recognition has been added for the 3+2 milling cutter, as well as improvements in the drill assistant and in the drill bit sorting algorithm to avoid excessive machine movements.

Meanwhile, in 3D milling, in Z Constant, a new function has been added to optimise the downstream step in the finishing and re-finishing process. A function has also been implemented to limit finishing by angle, the visualisation of holes by diameter.

In lathe technology, the new options for control of machining in the grooving areas, both in roughing and finishing processes, or the improved calculation times are noteworthy. A new button and a redesigned form have also been added to configure the chuck change in lathe processes and new parameter transfer function between machine heads, controlling both times and part management speeds.

Combined cycle machining also receives important new features such as the new Automatic Feature Recognition in 2D milling, the improvements in B-axis milling that now allows the drilling of inclined holes or the new function to avoid the error that some machines give when a movement crosses the origin (0.0). 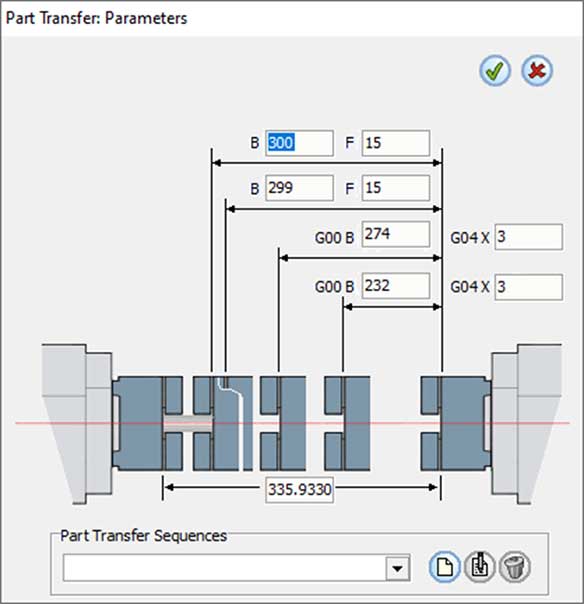 Online management of your needs 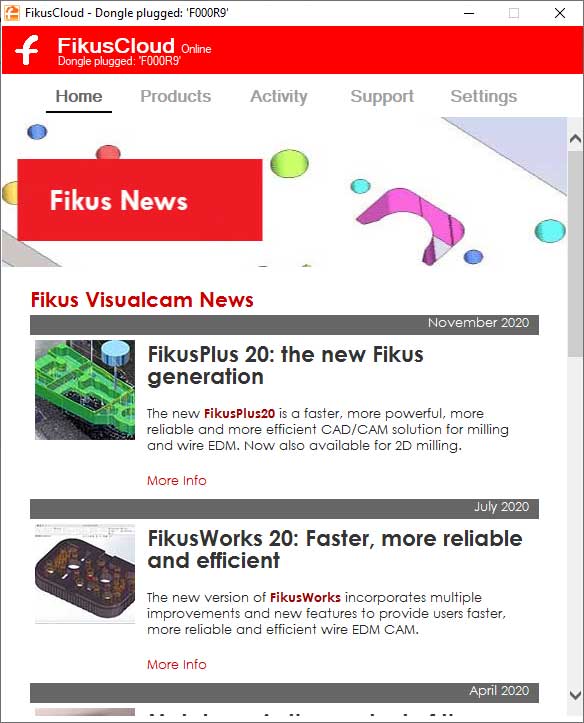 With version 20 of FikusSt comes important improvements in FikusCloud, the management system for Fikus solutions in the "cloud" that keeps the software permanently updated and allows easy management of updates, licenses, postprocessors, databases, backups or configuration data.

From FikusCloud FikusSt users will have access to information about the latest version and subsequent updates, as well as access to general information of interest such as Fikus technologies and products, but also technical articles and tips to get the most out of Fikus, as well as a FAQ button where you can find answers to frequently asked questions.